Yes, you saw that right, Aphrodisiac Macarons! These handcrafted macarons by Chef Samantha are perfect for enjoying the Valentine's holiday as the flavors are decadent and enticing. They pair perfectly with our soon to be released 2018 Late Harvest Sauvignon Blanc, which will be available to Wine Club Members starting that same weekend.

There are 6 macarons per box with 2 each of the following flavors: Fig & Pistachio, Chocolate Raspberry, and Strawberry Balsamic.

We cannot wait for you to try these macarons and you can enjoy either by pick up or togo onsite (we are unable to provide full service at this time). With the boxes being limited, be sure to pre-order your box! You can do so here.

Winter in the Vineyard & A Quick Look at the Year

Winter is upon us with its calm and cold presence ushering in a quiet time for the vines. I have a lot of times called this their sleepy time, but in more formal words, the vines are currently dormant. It is a perfect time for dormancy as the temperatures can drop below 30 degrees. Even in Paso Robles, California we can get freezing temperatures at night and early mornings. So, dormancy protects the vineyard from being hurt by the freezing temperatures.

The vines have gone through senescence after the hard work of harvest, which is the dropping of leaves. Since the leaves are now covering the floor of the vineyard, it indicates that the vines have stopped photosynthesis (energy production). The vines don’t die because they have stopped photosynthesis, but rather they depend on the stored energy in their trunk and roots. This brings up one of the important practices for a vineyard and that is soil health. The soil is what provides nutrients to the vines. During this season we will work on the soil by applying fertilizer and/or planting cover crop seeds (i.e. flowers, vetch, or barley).

Shortly, we will also work on pruning the vines to prepare them for the growing season. With pruning, the prior year’s canes are cut back leaving the best canes for the new year’s shoots. There won’t be a lot of activity with the vines until bud break which usually occurs in April and marks the start of the growing season. Below I have dug up a timeline I made years ago of the stages of growth throughout the year highlighting the important moments for the vines. The months listed are approximate as every year is different due to the weather.

My hope this year is to share more information about the vineyard when they are happening, so we’ll see how I do! 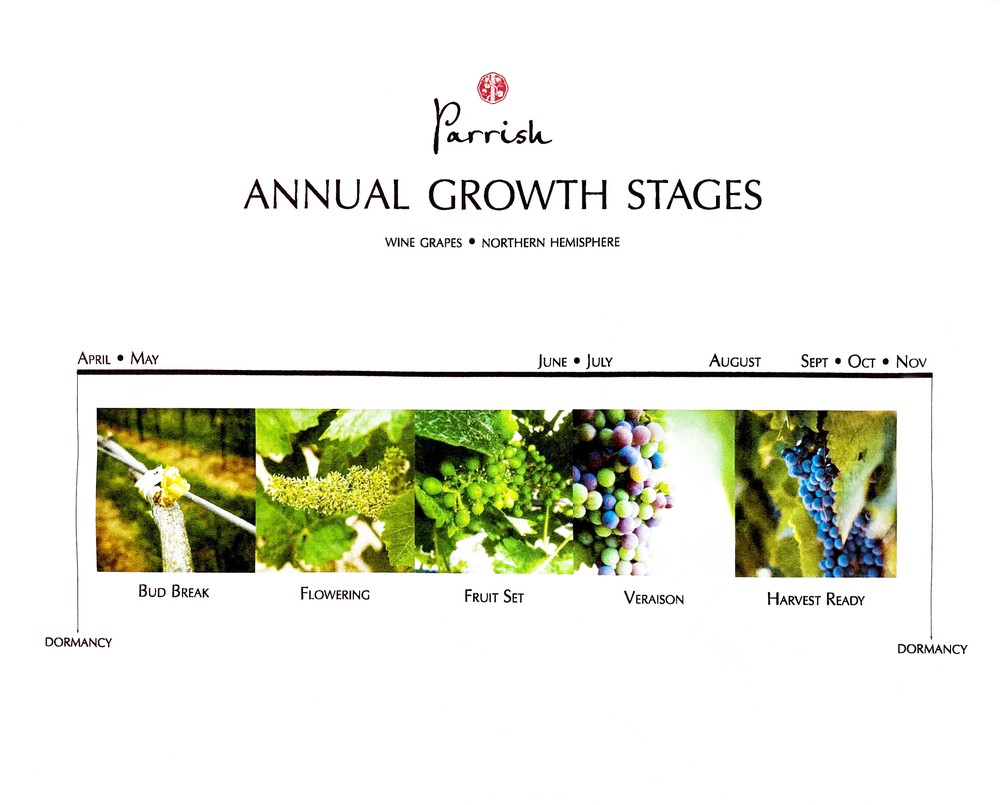